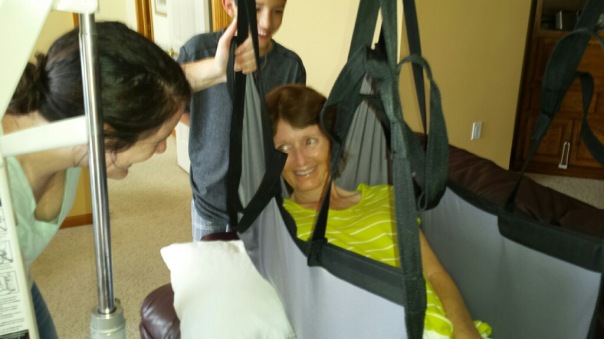 Ready or not I have graduated to a Hoyer Lift to help move me and the first time we tried it wasn’t pretty. We’ve had this big beast parked in our spare bedroom taking up valuable space for a few months. My legs are failing me and it’s getting harder for me to stand without my knees giving out so we decided to try the lift to give Mark’s back a break. After watching a YouTube video on how to use the lift, Mark laid me down on the couch on top of the hammock that was going hold my body when he lifted me. He attached the straps from the hammock to the arms on the lift and started to lift me. The fabric on the hammock spanned from my neck to the tops of my legs so when he began to lift me my head fell back to an uncomfortable position and my legs fell to the floor causing my back to arch. I don’t think the Hoyer Lift was designed to transport a patient with severe muscle weakness issues so Mark went back to the YouTube video and watched it again. Heaven forbid that he would ask for help from one of our many friends and family members that are nurses and physical and occupational therapists. It’s much like a guy not asking for directions because he thinks he is not lost and can find his way on his own. Anyway, before Mark aborted the lift he had an idea. He found a strap from my wheelchair that we weren’t using and he put it around my head and attached it to the hammock hoping it would support my head. Then he got two of his belts hoping they would support my legs. Lucky for me Kelly showed up and started laughing at us as Mark tried to lift me with the new adjustments. Both the strap and the belts worked for a short time but they were not secure so we decided we needed to get some help. Kelly called Airway Oxygen where we got the lift to see if they had a larger hammock that would cover more of my body and they did so they delivered it to us that day. The next day we tried the lift again with success. The new hammock worked perfectly and as Mark gently raised my body up with the lift and as I was dangling in midair he said it reminded him of hoisting an engine from a car.

16 thoughts on “The Hoyer Lift”