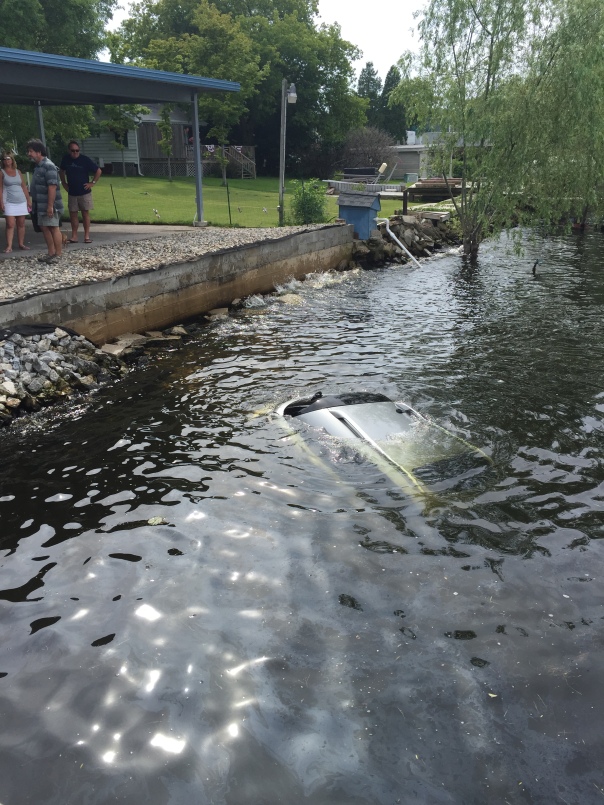 Saturday was full of excitement at Balcom’s Cove, the condo complex that we live in. John, one of our neighbors, was parked by the marina and accidentally drove his SUV into Muskegon Lake. Our brother-in-law Luz was sitting on our balcony and heard the car go into the water. Mark and Luz immediately ran out to help while Kelly yelled to her husband Chris who luckily was already out by the lake. Chris immediately began sprinting toward the scene and jumped into the water once he was able to see what had happened. By the time Mark and Luz got down to the water Chris and Bryan were already in the lake trying to help John get out of his car. Chris said when he first reached the car the driver’s side window was open and there wasn’t very much water in the car. John had one leg out the window and was trying to get out so Chris and Bryan both tried to pull him out but it wasn’t working. As the car started to sink deeper into the water Chris went to try and gain entry through the back passenger window to free John from the other side while Bryan reached in and grabbed John’s other leg, braced his feet against the outside of the car and pulled John out of the car to safety just as John’s head became completely submerged in the water. Once the water started rushing in everything happened fast. Once John was out of the car Bryan and John held on to the roof of the car in order to catch their breath before swimming to shore, at which time the neighbors of Balcom’s Cove were able to help John back up to dry land.

Ten years ago today Mark and I were in Germany celebrating with Bryan on his 17th birthday. He was on the tail end of his adventurous junior year as an exchange student and we wanted to get a glimpse of what his life was like for that year. What we found is that Bryan was placed with an incredible family. He was loved, challenged and exposed to a world of beautiful music by this family. He met and became friends with other exchange students from all over the world. Last week Bryan was able to introduce his girlfriend Ashley to his German family and meet some of his friends while on a nine-day vacation in Germany. Bryan’s host dad Peter sent us this family photo after spending four days with Bryan and Ashley at his home in Mannheim.

You are twenty-seven years old today and you continue to amaze us with your vibrant and loving personality. We are so proud of who you’ve become.

Happy birthday. We love you so much. 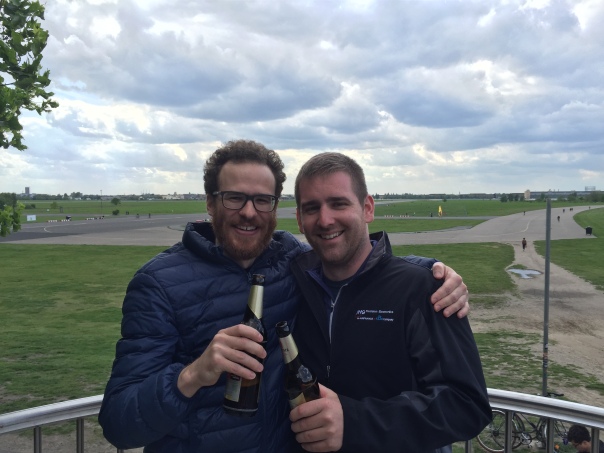 When our kids were in fifth and sixth grade at St. Michael’s they had an amazing opportunity to attend Camp Pendalouan to meet and bond with their future classmates from St. Francis and Sacred Heart before the three elementary schools came together as one class in the seventh grade. Chad and Kelly had already been through this great camping experience so Corey was excited for his fifth grade class to go and was hoping to get in the same cabin as his older cousin Matt Grimm who he loved and admired. Matt was one of the MCC high school students chosen to go as a camp counselor. The bond that developed between the elementary and high school students during their week at camp was always so amazing. While at camp the students were challenged physically and mentally on a difficult ropes course with the goal of encouraging each classmate on their team to finish the course, even the weak and the frightened. They learned silly new things like watching sparks fly while chewing Life Savers in the dark. They experienced first-hand what it was like for a large group of kids to eat everything on their plate and not to waste a single morsel of food. And they were guided spiritually in a beautiful but simple environment.

One evening at a St. Michael’s Home and School Association meeting principal Elaine Bertram informed us that a parent complained about inappropriate behavior at night in one of the cabins so the administration felt a need to cancel the overnight part of camp for the fifth and sixth graders. I was so disappointed so I decided to challenge it. The next day I talked with Elaine and told her I didn’t agree with the decision that was made and asked if she thought it would do any good to challenge it. Within hours Elaine had set up a meeting with three principals, a teacher, the parent that had the concern and me. I thought to myself, “Oh boy, what have I done.”

On the day of the meeting I was really nervous but I was prepared to state the value of keeping the overnight part of camp. As we gathered together at the high school for the meeting I believe we started it with a prayer. Everyone had a voice in the meeting and then someone suggested having a parent stay in each of the cabins. We all agreed this to be a great solution so we were able to resolve the overnight camping problem by having a parent stay overnight in the cabins with the students. I felt really good about the outcome and I believe everyone else did, too.

Thankfully, today the concerned parent and I are friends and some of our kids actually went on to become high school camp counselors themselves when they got older. Wouldn’t it be nice if all differences could end in a peaceful outcome? 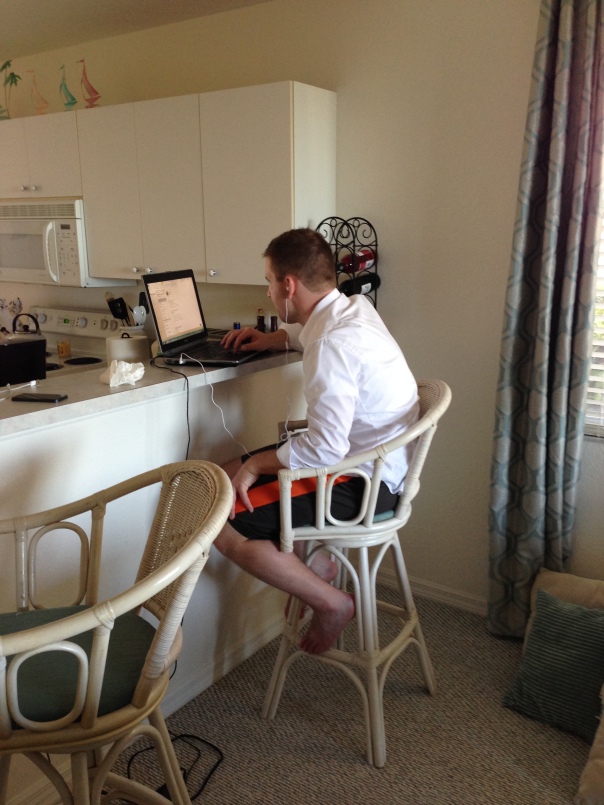 Mark and I really enjoyed spending our first week in Florida with Bryan and we were not ready to say goodbye to him on Sunday. We packed a lot in while he was here but the best part was that we got a chance to hang out with some people we love that live in Florida.

The week with Bryan wouldn’t have been possible without the compassionate people at Aerovision, his employer, allowing him to work remotely. It’s wonderful when employers are flexible with their employees.

Before I tell you about our car ride to Florida I need to explain a couple of things leading up to it. Since January I’ve only ridden in our van three times because of the frigid temperatures in Muskegon so we were not able to test our comfortable riding procedures properly. Plus my neck muscles have declined drastically from January to February which makes it difficult to keep me from falling side to side while reclining in the front passenger seat. With that said maybe you can better understand why we were not better prepared for a 23-hour car ride.

On the night we left for Florida Bryan worked all day but suggested we leave that night before I changed my mind again. Earlier that day Kelly bought us a queen-sized, cushy mattress pad with a thick piece of memory foam thinking it may make our ride more comfortable while laying on the floor. So by 8:00pm we were ready to roll. The middle row of seats were taken out of the van, the van was packed and warmed up and we said our goodbyes. Mark picked me up from my wheelchair with Bryan waiting in the van to assist. That part was flawless until they tried lifting me onto the back row of seats where that comfy mattress pad was placed. The temperature in Muskegon that night was zero degrees and when I get cold my teeth chatter uncontrollably and my legs stiffen so when they tried to lay me on the seats my legs wouldn’t bend and that nice thick piece of memory foam took up too much room. Reluctantly we took the memory foam out of the van and left it at home. So there went my comfy padding for the floor and laying on the back seats wasn’t going to work either. My mind drifted back to what Bryan said to Mark and I that morning about finding a solution to all of our obstacles that we may face and if we can’t we will turn back.

As a temporary solution Mark put the pregnancy pillow on the floor and laid me on it and we set off for Florida. For the next hour Mark rearranged the stuff in the van so we could both lay down. The pregnancy pillow turned out to be the best solution of all and that is how I stayed on the whole trip to Florida. Bryan drove all night while Mark took care of me, repositioning me every two hours, and at daylight Mark drove while Bryan took care of me and slept. We made it to our final destination 23 hours after we left home thanks to my awesome helpers and a very comfy pregnancy pillow.